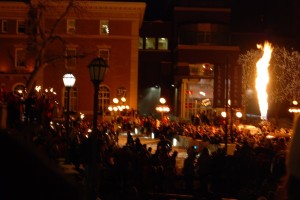 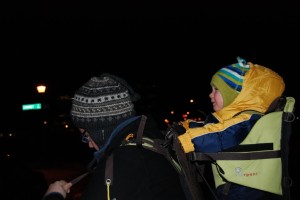 We had the BEST weekend EVER!

On Friday Tony kicked me out for the evening so I could see the ULTRA girly movie Bride Wars. He had another dad come over and have a play-date. I haven’t seen a movie in the theaters in FOREVER so this was a special treat! The movie was okay but just the fact that I didn’t have a toddler trying to climb all over me or a SO trying to talk to me about work was A-Maz-Ing.

Saturday I worked but left early to head over to St. Paul to the Winter Carnival. It was in the upper 30s so the temp was just right and the energy there was awesome. Then we watched the Vulcans overthrow King Boreas. The Vulcans are associated with fire (to chase away winter-King Boreas) so the whole parade was filled with FIRE! There were firetrucks, and flame jugglers and fire-baton twirlers and the baskets to hot air balloons. I never knew that hot air balloons could make such a huge flame-there were some that were over 30′ in height. It was amazing. We had an awesome view for the overthrowing of King Boreas. We were on the steps of the library and they were on the other set of steps so we were at the perfect height and angle to see.

On Sunday we got up to go to church only to realize we were getting there as the service had ended (hey, it was early and we weren’t functioning at full capacity yet) so we drove past a house we are looking to buy (fingers are crossed). After that we just ended up driving and before we knew it we were in Duluth! So we hung a right and crossed into Wisconsin and drove up to the Apostle Islands. We got out at one of the parks on the shore and walked out onto Lake Superior. We stopped at the top of these giant frozen waves and just looked out over frozen and not frozen water. It was fantastic! We were going to hike a bit more than we did but I looked at the map and decided to head over to the ferry and hike on Madeline Island. We get there and the ferry is frozen into the lake. Services are suspended for the season. Soooooooooo we hop out onto the lake and DRIVE to the island! They had a path cleared on the ice to get to the island! I had a bit of an upchuck feeling in my stomach and told Tony to turn around and he did but as we were getting back on land a large truck went out so we decided to follow and if they wend under, we’d stop and return to dry land (after trying to help them of course). This may be nothing for some of you but I come from the South where nothing freezes over-much less a large body of water! The “ice road” was a little over 2 MILES long. We got to the island and wandered around La Pointe (not much happening there in the winter) and headed over to the park and Tony pulled Eli and I on the toboggan on the beach. Eli thought that that was the best thing IN THE WORLD! I wish we had the camera but we were just heading to church that morning and never thought we’d be out on an island in Lake Superior.

I want to live in La Pointe, WI. I’ve decided it. They have a post office and everything. I could totally take my business out there and be happy as a clam. I’d just have to close up shop during the times where the ice is too thin to drive over and too thick to break up for the ferry. That’s fine by me-the view is worth it!