Girly has been wanting to sew and make sewing for kids tutorial video lately so I thought this would be a great project to start with!

As part of the fun, she wrote up a script, edited it, and wrote it on cue cards.  E was combo cameraman and cue card holder.  And after all that work, she promptly went off script and just started talking!  That’s okay, it was really fun and a great learning experience for both of them.  Then they both played around with iMovie and edited it down to the point where I just sped up a few things and added some music.

I convinced her to make a people-sized pillow for the video because it was easier to see on camera and so I wouldn’t have yet another tiny pillow around the house (I swear we have about 4,520,573,839,834 of them floating around all the corners of her room and the family room…)

Go check out her very first video in the “Sewing with Girly” series (she named it; I think it’s a pretty clever name)!

And now for a trip down memory lane:  a picture of 2yo Girly sewing one of her many scrap fabric hats she was obsessed with (she still loves hats)! 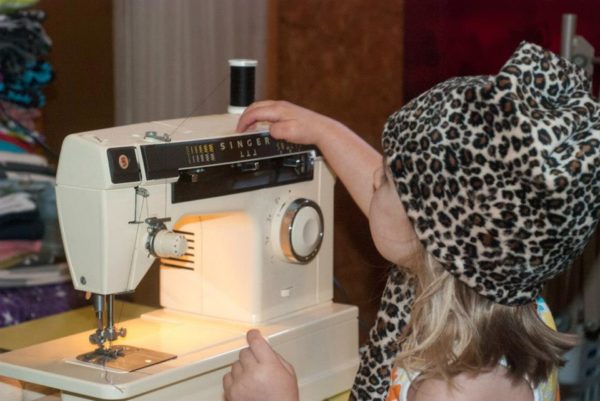 2 thoughts on “Sewing with Girly: Make a Pillow”